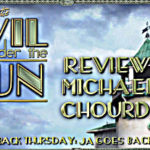 You are reading
Throwback Thursday – Agatha Christie: Evil Under the Sun – Review 1 of 2

Throwback Thursday – Agatha Christie: Evil Under the Sun – Review 1 of 2

Published by The Adventure Company

Here we are with the third entry in The Adventure Company’s Agatha Christie Collection.  Evil Under the Sun is yet another attempt to reinvent a famous novel and movie (one of the few that has been filmed twice) as a computer game.

You play as the famous Arthur Hastings, Hercule Poirot’s best friend. While enjoying a late night chat in his office, Poirot welcomes you to take his place in a past case, involving three apparently unrelated murders. You will have to use your little gray cells to discover the truth but this time the great Poirot will assist you when you need help.

The otherwise pleasant looking Seadrift Island is a place of hidden evil.  Suspicious characters inhabit the Smuggler’s hotel. Throw in some mysterious paths, secret tunnels, ghost sightings and a murder and it becomes inevitable that evil under the sun will rear its ugly head. This is Agatha Christie at her best.

What don’t I like? The close-up of some characters (including Poirot and Hastings) can sometimes appear fake and return you to the reality that this is a game.  It is a minor flaw compared to the other aspects, but they could be more carefully designed nevertheless.

Also, there is some minor pixel hunting – not that the objects are small, but they are somewhat ‘hidden’ in the background and you have to observe very carefully to locate them.

I always listen very carefully the music and sound effects in a PC game and can easily claim that the musical score inEUTS is very good.  Not only does it immerse the player into the mystery, but it also changes depending on the situation – each act has its own music theme.

The voices are very good as well.  David Suchet was not available to do the voice of Hercule Poirot this time, but the voices of Poirot and Hastings are clear and recognizable.

Evil Under the Sun installs completely from 3 CDs and plays without them (thumbs up for that). The usual menu appears when Esc is pressed, allowing save/load (unlimited saves, another thumbs up), and options (sound and graphics).  Saving includes a screen shot (thumbs up), but doesn’t allow a large save name or the use of any keyboard character.  I wonder if TAC developers have a 52 key keyboard.

F2/F3 perform a quick save/restore at any screen, which is not seen at the save list.  Also, a minor flaw: when you save, you have to press ‘Resume’ to get back to game. Somewhat annoying, isn’t it?

The game is a 3rd person, 3D graphics click & go game.  You can’t go everywhere – the game moves you as it wishes.  The very big cursor changes its icon when you are supposed to do something with an item, but this has some bugs (for example, in the monastery cave you are supposed to put an object in a hole, but until you have this object, the hole doesn’t turn the cursor red).  Alt+F4 exits immediately (I like that), and also you can click the mouse to bypass dialogs.  Of course, text for the dialogs is provided.

When you move your cursor up, there is an icon-driven taskbar at the top of the screen.  It contains an option to return to the main screen, a button with the face of Poirot or Hastings, which automatically returns you to Poirot’s office for advise/hints; an inventory icon and a documents icon (which also contain hints).

A very innovative hint system also exists in the game.  The ‘Moving Finger of Suspicion’ (possibly the next TAC production?) points to a verb like ‘talk,’ ‘follow,’ ‘observe’ when you place a character’s card in its tray. Although I never needed to use it, it is a nice option.

The only downfall is that there are no in-game maps that can be used to travel quickly from one place to another.  I don’t like games without maps that require the player to move manually across large play areas.  Yes, it is more realistic not having a map, but I don’t want to revisit all of the beaches and paths over and over again.

This is my only problem with Evil Under the Sun (and its predecessors, And Then They Were None and Murder on the Orient Express) – they are not successful at making you feel as though you are actually inside or part of the case you are solving.  Agatha Christie always managed to immerse the reader in her stories to such an extent that you felt as though you were experiencing the horror and evil feelings along with the characters in her book; the games don’t, but this could be due more to the limitations of the computer gaming medium.

No matter how good this game is, it is certainly no match for the book, at least as regards the atmosphere.

You must complete eight acts.  In each of those acts, various events will take place (events that are not always found in the actual book plot).  I don’t like the fact that the murder takes place after Act 5 – which means you spend acts 1 – 5 in non-murderous and evil researches.  One of these acts takes place at night (sad; I would like more darkness – but this is a sunny game eh?).

There is no alternative ending as there was in the two previous games.  The murder and solution here is the same as in the book – what differs is the finale and the way the murderer is ‘arrested,’ but I expected more from TAC. Actually, the only game that offered a different plot was And Then They Were None.

The riddles in this game are inventory-based – one exception is a rather easy astrology riddle found in Linda Marshall’s room.  I must admit to being somewhat disappointed, as TAC apparently put much care and effort into the graphics, music and sound, but shortchanged us on the puzzles.

And even at that, in the puzzles that require you to make an educated decision (like the light riddle or the ending), you can just guess – and the game will correct you if you guess wrong.

You can’t die in the game – but there is a problem.  On two occasions, you have to select the correct ‘question’ to ask a suspect and if you don’t do so, you have to restore the game or you will get stuck later without realizing why.  This is not a correct approach.  If the game would like you do something and you don’t do it, the game must not put you in an unrecoverable position.

This would be a very good game, but it suffers from a fatal syndrome: it will inevitably be compared to the original source material. If you can see it as a game independent of the book, then it deserves your attention and money for sure; but unfortunately the Old Lady’s books rock and dominate any comparison be it game, film or theatre. In my humble opinion, TAC – a superb company that is practically the only successful adventure game publisher – should reserve their inexhaustible sources and talented developers to create more original titles such as The Black Mirror, Secrets of Atlantis and so on, before considering another Agatha Christie title.

This site uses Akismet to reduce spam. Learn how your comment data is processed.

Would you like to get free games and write reviews?

We'd love to hear from you. Tell us a bit about yourself and your experience. Even if writing is not your forte, we are always looking for help in other areas.

Enter the username or e-mail you used in your profile. A password reset link will be sent to you by email.